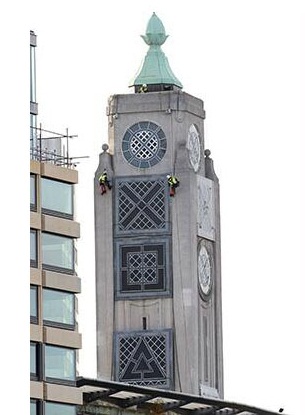 Sony Computer Entertainment in the UK is preparing for the PlayStation release on 29 November with several events and stunts, including customising one of London’s famous landmarks, the OXO Tower, with the brand’s trademark shape symbols.

With the US launch of Sony’s next gen gaming console happening tomorrow it looks like the company is getting things ready for the UK release in a big way, literally.

Posted on @PSAccess’s Twitter feed, the company asked the rhetorical question, “Are those the PlayStation symbols going up on the OXO Tower in London?”

The picture above was also attached, which shows workmen placing some specially designed signs to replace the usual OXO marked out on each face of the tower.

Whether a launch event or other party-based gathering will be happening at the venue is yet to be announced.

Who knows, Sony might be planning to take over a selection of landmarks across the country, twisting them to PS4’s own aesthetics.

In addition to the OXO Tower stunt, Sony is inviting members of the public to a dedicated PlayStation 4 lounge in Covent Garden, London. It’s doors will be flung open tomorrow, November 15th, and stay open until December 1st so you can have a play with the new console over the next couple of weeks.

Details are available on a designated Facebook page at facebook.com/playstation4lounge