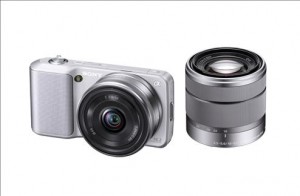 Sony has now chucked its hat into the lens-swapping arena with a couple of brand new interchangeable lens cameras. They also decided to give a brief flash of their lens-swapping camcorder – the little teases!

The NEX-3 and NEX-5 are the two new snappers in question and they look rather nice. Both sport a new â€˜mirrorlessâ€™ construction and no doubt have the Micro Four Thirds market in their sights.

To stand out from the crowd, Sony claims to have the thinnest and lightest of lens-swapping shooters. The NEX-5 measures a super-skinny 24.2mm at its thinnest point, while the slightly chunkier NEX-3 comes in at 25.4mm. The NEX-5 has a magnesium body which Sony says makes it the lightest interchangeable lens camera in the world.

Both NEX’s pack the new Exmor APS HD CMOS 14.2 megapixel sensor which is larger than the Micro Four Thirds offering. Youâ€™ll also find 1080i HD video recording on both models which is a first for the Sony Alpha range.

Both cameras support Sony’s own Memory Stick and SDXC memory cards and a range of add-ons including a pancake lens, fisheye lens and a mount adaptor so you can employ any of the 30 available Alpha lenses.

The 3 inch LCD features easy to use controls, with Sony boldly claiming a â€˜never get lostâ€™ function which should help you find your way back from the deepest menu.

That camcorder I mentioned earlier will also be a lens-swapper. It will be armed with an Exmor APS CMOS sensor, and will shoot 1080p video in AVCHD format. The E-mount interchangeable lens system will make the camcorders compatible with Sony’s still camera lenses. Sony reckons it’ll be around by the Autumn.

As you’d expect – no news on prices but you should be able to grope the stills snappers in June.