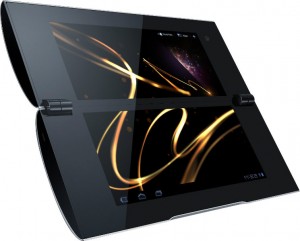 The Sony Tablet P, previously named S2, is available to buy in the UK as of today. Does this clamshell pocketable dual-screen device make sense for the price?

You and I will probably be used to Sony charging top dollar for their tech but, to be fair, it always does what it says on the box – and it does it well.

The Tablet P is an oddity. The Tablet S looks like a tablet and the stylish slate has been here since September but the P sports a clamshell design.

When the Tablet P is folded in half it looks like a long, smooth cylinder that happens to be equipped with a 5-megapixel camera. Open up the P and you are greeted by two 5.5-inch, 1024×480-pixel touchscreens being motored along by a dual-core Tegra 2 processor.

Sony reckons that, as it opens like a book in portrait, people will love to read their ebooks on it. Hold it landscape you get twin screens for browsing or compose an email with the virtual keyboard on the lower deck and your handiwork up top. It’s PlayStation-certified too – so you have access to a series of classic PlayStation games, using the lower screen to control the action using on-screen controls.

It all sounds rather groovy so far. It looks cool, it’s different, and it covers all the main tablet requirements with the bonus of being able to hold it like a book.

The Sony Tablet P has Android 3.2 Honeycomb as its operating system. This is the tablet-specific version of Android but the thing is it’s not the latest verison of Android out any more – that credit goes to Android 4.0 Ice Cream Sandwich which has already appeared on the Samsung Galaxy Nexus. The Nexus seems to be having a few issues but let’s move on.

If you don’t mind not having the latest OS on your new tablet then the next thing you’ll have to get past is the price. £500.

So, do you go for well built and quirky with an operating system which has already been superceeded or go and join the masses and buy an iPad 2?

Me? Well, I’d like to have quirky but an up-to-date OS. Personally, if I was looking to lay down some cash, I’d be waiting for the Asus Eee Pad Transformer Prime. It’s a tablet, it’s a laptop, it’s quad-core and it will be running Ice Cream Sandwich.