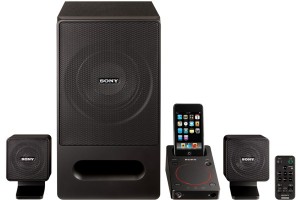 Those that have been reading my outpourings here may be aware that I love music and also write quite a bit on my trusty laptop.

The output on my laptop is ok but does lack the definition that I enjoy whether I’m listening to Sibelius or Skid Row on my main system. I also use my office set-up when I need to learn bass lines for sessions, cover version gigs, etc so I need to be able to hear the bass. Currently I have my laptop going through a Denon mini-system and out of some Q Audio speakers – it does the job.

When I was asked to try a 2.1 system by Sony that hooks up by USB I was certainly interested. Then I was told that the main control dial was also an iPhone dock that uses that USB to sync with iTunes – I said “send it over!”.

What I was sent was the Sony SRS-GD50iP – this four-piece system consists of an iPhone dock/main control station which connects to your puter via USB, two 10W satellite speakers and a passive 40W subwoofer. The satellite speakers are angled to be sat on your desk.

When I got it home and saw the cute 10w satellite speakers I was more than happy to be able to free-up some desk real-estate by swapping my Q Audios for them and then came the rather huge 40w subwoofer! Ok, this fella goes under the desk so no worries there – it’s just that whoever had this before me liked their bass – ALOT! Thankfully there is a bass adjustment button which, once pressed, can be dialled up or down using the large, orange lit, volume wheel to get it to where you want it to be. I was also overjoyed (perhaps too much) that the lighting was orange as my Razer Krait mouse sports orange lights, my Nova mouse mat is edged with orange and my laptop is black with orange highlights – Joy!

The control station is pretty neat (even ignoring the orange light). You plonk your iPhone/iPod in there and it sits above a large rotary volume control which is stylishly flush with the casing. That orange light is the volume/bass level indicator and moves round as you push the level up to max.

At the rear of the control station is standard 3.5mm jack outputs for the satellite speakers, and a proprietary connector for the sub with just enough cable – a little more may be handy for some. The system is mains powered and thereâ€™s also a 3.5mm line-in jack for use with other media players. As well as having the sound from your computer coming through the speakers you are able to playback media held on your Apple device or select the line-in when you’re using another source by pressing the Input button.

A separate, tiny, wireless remote is also included, which has the same controls as the dock as well as iPod menu navigation and playback controls – it could be considered a choking hazard it’s so small 😉

I liked the fact that you could opt whether to drop your iThingy in the dock just to recharge it or to sync it at the same time by the flick of a switch that can be found on the opposite side to the on/standby button on the controller.

If I was to be over-picky about the sonics I’d say that the subwoofer sometimes proved a bit of a handful and at times became a bit boomy and overpowering. Some genres of music fared better than others but I have to remind myself of the whole point of the SRS-GD50iP is that it’s hooked up to your puter and has to handle occasional film watching, music, YouTube clips and gaming. These are not home cinema replacements and audiophiles would never listen to music via a laptop!

The system works well with gaming and gun fire is nice and full of bass and engine noise is replicated nicely, some rock tunes got muddied, Industrial and Electro tunes came through well, more acoustic lead tracks by the likes of Tori Amos, Kate Bush and Noe Venable fared pretty well as did most jazz although the warmth of the bass was sometimes lacking.

Personally, even with the minor faults, I want to keep these. The system is so easy to hook up (without instructions – there’s that bloke test again), the dock/control station looks real cool, with the sub under the desk the satellite speakers take up very little room and the sound is more than acceptable.

and you might be able to find it cheaper if you shop around.