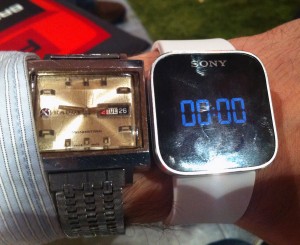 While I was supposed to be concentrating on Sony’s NXT range of smartphones at their London MWC show and tell I managed to get up close and personal with the Sony SmartWatch.

The SmartWatch is a digital watch which just so happens to run on Android OS and connects your Xperia phone via Bluetooth.

I’ve seen and played with various watchphones/wristphones and the SmartWatch basically looked like an iPod Nano – complete with clothing clip, but it does quite a bit more.

As well as displaying the time like any good watch should, you can scroll through dozens of apps by flicking the touch-screen with your finger.

It reacts pretty quickly (although the version I was playing with would give in every now-and-then).

You can receive notifications direct from your phone, including texts, calls, Twitter and Facebook updates, and more.

The SmartWatch vibrates when you receive a notification so you’ll never miss a text or tweet – you can even have it display turn-by-turn directions so you don’t have to keep waving your smartphone around when you’re lost. You can have it vibrate when you’re coming up to a turning, check your watch for which way to head, and then you’re off again.

A couple of other nifty features include the ‘find my phone’ app and the remote camera app.

Find my phone makes your phone ring and vibrate, in case you lose your mobile down the back of the sofa – it will make your phone ring loud even if it was switched on to ‘Silent’ which lost phones generally are.

The remote camera app is even cooler/creepier though. This application allows you to take photos with your phone from afar. You even get a video feed of what your photo will look like, so you’ll know if half of your head is out of shot. Perhaps it’s just the way my mind works but I did suggest that it’s an ideal way of taking snaps or video without anyone else knowing – that comment was greeted with raised eyebrows. I was quiet from there on.

The SmartWatch screen turns off if the watch isn’t in use but comes back when you tap the face of the watch.