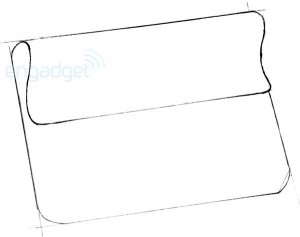 Sony seems to be warming up and set to throw its gauntlet into the tablet ring with whispers of a a 9.4-inch Android device doing the rounds.

Better still is that the “S1” is going to get the PlayStation treatment. According to â€œtrusted and independent sourcesâ€ the slate will run on Googleâ€™s Android 3.0 Honeycomb OS.

In terms of key features, this is set to be a full-blown media and gaming tablet and no doubt will lean heavily on Sonyâ€™s recently launched Qriocity service to deliver music, games, ebooks and video on demand content.

As well as landing with Sony PSOne games preloaded onto the tablet, some form of PlayStation integration is likely to feature as well. The S1 follows the Xperia Play and is now apparently PlayStation certified which is good news for gaming fans. Chances are that it’ll slurp games via the Android PlayStation Suite like its pocketable kin.

I’m digging the â€˜wrapâ€™ design adopted for the S1 which is said to mimic an open paperback stuffed into the back pocket. Apparently the shape makes the tablet better to touch-type on, and make it easier to hold in one hand. I can’t help thinking that it’s slightly reminiscent of Notion Ink’s Adam 😉

Constructed from materials that â€˜feel premiumâ€™ the S1 will be loaded with cameras front and rear, a USB-A port, an IR port for controlling other devices, a Bravia Remote function, and will pack a Tegra 2 processor.

There has even been talk of Sony S1 pricing with $599 being a likely price point to grab a Wi-Fi only version. It is also expected to start shipping in September, which is around about the time many are talking about Apple preparing something new and tablety too.