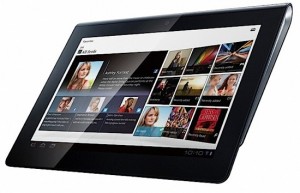 Hankering after the debut tablet from Sony? It seems you wont have to wait long before you can get your name down for an S1!

If you recall the PlayStation certified 9.4-inch tablet features a wedged design which is said to resemble a folded paperback or newspaper – more importantly it is loaded with Android Honeycomb which has been skinned by Sony and has an Nvidia Tegra 2 chip onboard.

There has been a rumbling around the Sony S1 Android tablet which has been growing larger since documents have been reportedly spied that state that UK Sony Centre shops will be taking pre-orders in September.

Just to whet your appetite there’s more photo’s appearing about the interwebs. Notebook Italia have quite a number of said items and videos to boot!

Slink over there if you want to see the S1 and it’s dual-screened sibling, the surprisingly named S2, in action.

Here’s one as a taster 🙂