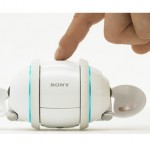 The Sony Rolly has always been an enigma to me.

Ok, it’s cuteÂ – It’s probably one of the cutest small speakers around.

It’s a portable, trundling, dancing speaker – but the sound isn’t great for Â£250.

It’s a music player able to stream via A2DP Bluetooth or play from its internal flash but there’s no placeÂ to shove your 3.5mm lead.

Â Sony are now updating it – and it will be controlled by YOU!! MWAHAHAHAHH!!!

Ahem.Â Â Next month, Japanese Rolly buyers will be able to getÂ the new SEP-50BTÂ version complete withÂ Bluetooth controls thus allowing them to make Rolly dance and spinÂ like a performing monkey-bot allÂ directed via their mobile phones.

I can imagine the high jinks and thoroughly wicked japes to be had through controlling the egg-shaped dancing speaker under somones chair and then unleashing a choice cut from ‘Cannibal Corpse’ as the little mp3 player starts its own circle pit :)Â

The new systemÂ will actually give youÂ control ofÂ up to seven of the little blighters at the same time using a mobile phone or laptop.

I reckon it’s time for some synchronised dancing……….