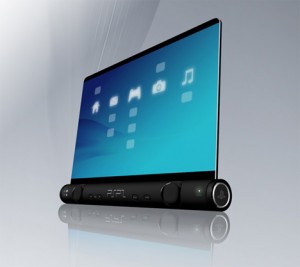 It seems that Sony’s not prepared to take the battle of the handheld gaming rig lying down!

There was a few whispers last week from publishers hinting that there was rumblings of publicity prep happening for a Sony portable.

So – let the leakage commence!!

According to VG247, the PSP2 will be sporting two cameras taking care of front and rear duties â€“ which would support the idea that Sony is gunning for the Nintendo 3DS. Itâ€™s also claimed to be packing a touchscreen (we’ve heard that before) and physical PlayStation buttons to please the more hardcore gamers.

Like the PSP Go, the PSP2 will ditch physical media by grabbing stuff via Wi-Fi but with the added benefit of possibly bringing in 3G to the equation. Seems that they do have an eye on the iPhone 4 😉

What’s got me interested is the chat about some serious graphic abilities – apparently Sony are cramming in a four-core Cell CPU. This would give you a handheld PS3 almost as its larger sibling rocks an eight-core version.

I’ve heard that it might get flashed next month at E3 and that it will be out early next year – yeah, rumours are still rumours.

We waiting for a PSP2 last year and we got a Go! To take on the 3DS and the next gen iPhone Sony really have to pull something out of its hat. Hopefully something resembling the picture might work 😉

Have you lost interest or are you hoping that Sony re-ignites the PSP? I for one loved the first version but it has since sat in its gaming case with its UMD’s for almost 18 months…….