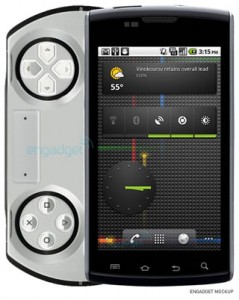 I for one have been waiting for a couple of years for this to actually happen but it seems that Sony Ericsson might finally be blessing us with a PSP Phone!

According to a “trusted source” Engadget reports that Sony Ericsson is working on an Android 3.0 phone that could become a whole new gaming platform! 🙂

The as yet unnamed handset is said to have DNA from Xperia and PlayStation which is a very decent sounding set of parents.

The games will have the 3D graphics quality of the PSP which will have their own corner of the Android Market specifically catered to them. If your current Android blower has the smarts then you too can join in the gaming fun!

The game-playing mobile has been described as being a PSP Go mated with an Android blower.

Engadget has thankfully sketched up an artists impression that shows PSP Go game controls instead of a QWERTY keyboard, PlayStation-style d-pad and button controls. Â  It will use a touchpad instead of a joystick.

Personally I prefer the original mock-up from 2008 (see gallery) 😉

Expect a screen somewhere between 3.7 and 4.1 inches wide with WVGA resolution (480 pixels high). It will probably run on a 1GHz Snapdragon processor and have a 5MP snapper round back.

For me – if they chuck in Walkman audio and a standard headphone jack they could well have a winner!

How do you like that then? Would else would you want on the gaming handset?