Sony PSP 2 Could be Go!, Slide or Flip 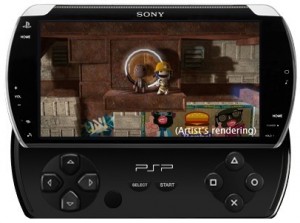 It’s getting hot in the PSP 2 rumour-mill!

The latest is coming from 1Up via some “sources directly involved with the new system”.

First of all it wont be the PSP2 – According to 1Upâ€™s sources, Sony is dropping numerical titles, such as PSP 2 or PSP-4000 for real, proper words.

Go! seems like the most likely choice as Sony already has a range of PSP accessories sporting the Go! label, including the Go!Cam camera and Go!View video on-demand service.

So, PSP GO! could be the next gen handheld gaming machine from Sony 🙂

The UMD is out, replaced instead with options for either 8GB or 16GB of built-in flash memory.

A newly enhanced download store will take the UMD’s place, packing an extra 100 classic and brand new PSP titles to download. In fact Gran Turismo Mobile is rumoured to be one of those new launch titles.

The same D-pad, analog nub, and face button configuration remains, but they now slide out from the bottom of the unit (check out the concept pic).

Expected launch is September for Japan and late October / early November for US.

Sony’s supposedly going official with all this during its E3 press conference in early June, and for now they’re opting to give the “does not comment on rumors or speculation” response.

So, we still have to wait for E3 to find out the exact dimensions, specs and so on.

Reckon it’ll be worth the wait?