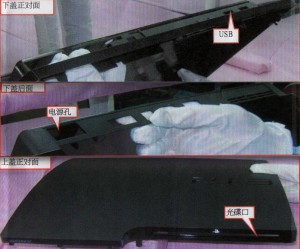 What you’re looking at is the Sony PS3 Slim.

A sleek, redesigned version of the Sony PS3 is apparently in production, if pictures from the manufacturing plant and posted on a Chinese message board, are to be trusted.

The Kotaku writers that grabbed this story, and commenters on their post, have already questioned the validitiy of these pictures.

There are particularly doubts over Sony changing its logo for the PS3 in the middle of its lifetime – but then everyone calls it the PS3 and not Playstation 3.

So the Sony PS3 Slim pictures could easily be fake – but lovely none-the-less.

That said, the picture of the Sony PS3 Slim packaging looks very realistic.