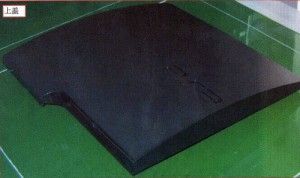 The PS3 Slim has been bouncing around the interweblogosphere for a while now and there’s even been pictures of the new console and its packaging but no one really had an idea when, if at all, the thing would bounce into the stores.

How about this month?Â  How’s that grab ya?

The folk over at TechRadarÂ spotted the rumoured shelf date for the PS3 Slim on theÂ Taiwanese site UDN, which claims that Sony has signed production contracts with both Foxconn and Pegatron to produce theÂ beachbodied PS3 -Â  with the first stock arriving at Sony’s door in July….. like anytime now!

OK – soÂ Sony might not actually get them into the shops this month here in Europe butÂ there’s a better than even chance that if you live in Japan you may well be able to get the skinny PS3 this month.

If you take July as the Japanese shelf date then I’d guess August/September to be aÂ reasonable expectation for theÂ UK date.

UDNÂ also suggests thatÂ this will be the lastÂ PS3 -Â  claiming ‘a next-gen console based on Sony’s motion controller is due in spring 2010.’

So – would it be worth getting the Slim as, in essence,Â your spanky new PS3 Slim could have just one year of life in it as a cutting edge console?

Mind you, it might be nicely cheap by then.

Will you be updating?