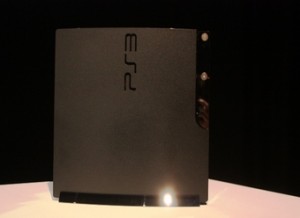 Sony has finally confirmed the new version of the PlayStation 3 – the PS3 Slim, and it’ll go on sale worldwide in the first week of September.

It was unleashed at Sony’s keynote event at the GamesCom gaming conference last night in Germany after appearing for pre-order on a couple of American store sites.

The new console is 32% smaller than the current PS3 as well as being 36% lighter.

The sleek body now sports a matte finish instead of a glossy one. Tasteful 🙂

Inside is a 120GB hard disk, but all other specifications seem to be the same as the current 80GB model.

I must add that Sony says it has completely redesigned the technology on the inside.

“The internal design architecture of the new PS3 system, from the main semiconductors and power supply unit to the cooling mechanism, has been completely redesigned,” Sony explains, “achieving a much slimmer and lighter body. Furthermore, power consumption is also cut to two-thirds.”

Both the current PS3, and the new PS3 Slim, will get firmware updates on 1 September, bringing the console’s software to version 3.0.

This update will include support for Sony’s Bravia Sync technology, which will allow the PS3 to be controlled with a Bravia TV‘s remote control.