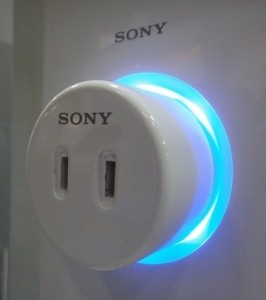 We’ve all done it – our phone or laptop is running low on juice so we give its battery a boost via the pub/restaurant/cafe/train/office/waiting room’s wall socket. Sony has created a power outlet which requires authentication and then will take payment direct from your bank account – charging for recharging?

Sony has just demonstrated their authentication outlet which manages electricity use on a per-user and per-device basis thanks to in-built NFC (near field communication) and RFID (radio-frequency identification) tech.

Being charged directly for recharging your gadgets might seem like a certain company making money from public plug points but, according to Sony, the technology will have many important uses. These range from managing payments for recharging electrical vehicles to avoiding blackouts by intelligently regulating the use of power.

The demonstration in the video below shows a portable fan and a hairdryer being plugged into an outlet that has the ability to authenticate devices. The gadgets don’t need to be modified as they plug in to a plug that contains the NFC chip, and then in to the outlet.

“The authenticated equipment can be managed via the cloud, and its power supply can also be controlled,” DigInfo notes. “So for example, if demand is about to exceed supply, blackouts can be avoided by switching off non-vital devices, while keeping other more essential devices such as healthcare equipment and refrigerators on.”

There’s two different versions being developed by Sony. One uses the NFC-based contactless card technology (with Sony’s FeliCa smart card system), whereas the other utilises “RFID Over Power Line” technology which sends authentication information over the power line.

Sony describes them as: “The contactless IC card technology establishes wireless communication between an IC chip [in the plug] and a reader/writer [in the outlet] via an antenna, while the new ‘RFID Over Power Line’ technology does so via physical power line cables,”.

According to the video our banks wont be bothered by this technology until 2030 – Phew!