Is this the Sony PlayStation 4? 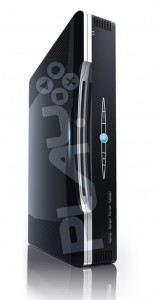 Sniffing around the interwebs for new tidbits about the new Sony gaming console, the PS4, still doesn’t lead to anything official – although a new report from developers making games for the PlayStation 4 does squirt out some juicy details.

Sony has begun issuing game developers with a new version of its “Orbis” development kit, which gives some idea of what the final hardware inside the PS4 will be like.

Under the hood will be something akin to AMD’s A10 Accelerated Processing Unit and paired with a beefy 8 or 16GB of memory, which will enable the machine to run 1080p games at 60fps in 3D with “no problem”.

The PS3 successor will support Blu-ray, will not be built in Japan, and will be “very affordable, but no slouch”.

The machine will ship with a 256Gb hard drive “as standard”, and feature similar connectivity and HDMI input/outputs to the PS3.

Despite Sony’s purchase of cloud game streaming service Gaikai earlier this year, the new PS4 will still have a Blu-ray disc drive for games and movies.

The current PS4 Orbis dev kit also supposedly shows off some of the software we can expect to see on the final product. That would appear to include an updated XMB interface, as well as smart multi-tasking, so that you can press the PS button on a gamepad and jump to any other app or service, then dive right back in.

DLC (Downloadable Content) will be able to be purchased mid-game and played instantly upon returning from the store.

It was recently reported that Sony’s next console would feature 4K resolution support in line with a rumoured new range of Sony TVs.

The Sony PS4 is expected to be announced just before E3 next year (in June), so we’d expect to hear lots more about it before then. In the meantime, let’s; hear your thoughts in the comments below. Is this the next-gen console to go for?