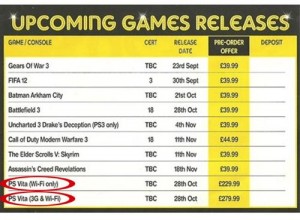 The socially capable next generation Sony handheld gamer, the PS Vita, has just had its release date by Blockbuster.

Sony’s PSP follow-up has appeared on marketing material which covers Blockbusters list of big holiday releases – on there is the likes of Call of Duty: Modern Warfare 3, Assassin’s Creed Revelations and Gears of War 3.

Amongst all of that the promotional flyer states that both the WiFi and 3G versions of the PS Vita will launch on the same day, October 28th and will cost you £229.99 and £279.99, respectively. These prices are more-or-less in line with the US prices – it’s the ol’ swap the $ for £ exchange rate folks!

Sony is hoping that the next generation portable will have enough smarts to battle against the ever growing phone-gaming market. It has a number of tricks up its sleeve but will it be enough?