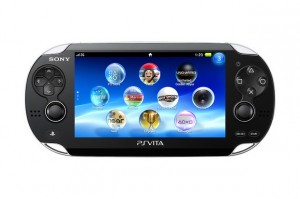 Sony’s NGP console has had its official naming and, with little surprise or amazement if you read GadgetyNews, is dubbed Sony PlayStation Vita.

The first thing you’ll notice on the Vita is its rather large OLED touchscreen which measures 5-inches and, if you flip it over, the touch-sensitive trackpad. To give you an idea about the size of this thing – your iPhone 4 would just cover the screen area 😉

The PlayStation Vita is a handheld for you bass players and pianists out there – You see, this handheld console measures 182 x 84 x 19mm. That’s even bigger than the PSP 3000 although the Vita has had fewer pies.

The Vita is pocketable in the same way as a small laptop. This portable gamer is wider than the Nintendo 3DS so a rucksack, manbag or generously pouched jacket will be required. Granted in a bag or similar it’s not going to be a room hog.

That 5-inch display is an OLED touchscreen which will dish out a maximum resolution of 960×544 pixels. Now, a 5-inch OLED may prove to be a bit of a power leech so before the Vita hits the streets Sony has some power management to deal with. The whole point in having an OLED screen is for those bright and vivid colours, as well as a great resolution – Sony is obviously wanting you to enjoy the same experience as you’d get at home playing on your HD TV but that bad boy is plugged in.

It’s all about control and this is where the Vita scores. You get a pair of analogue sticks which should ease the craving for your home console when away; but it’s thatÂ touch-sensitive area on the back of the Vita which opens up new dimensions….

Stroke my Back and Call me Vita

Reach around the back of the Vita and your fingers will find its sensitive area. This matches the displays size and works pretty much the same as aÂ laptop trackpad. It’s good to see both Sony and Nintendo thinking outside the box with their gaming controls.

Vita is also rammed with other goodies. The handheld gamer gets front and rear cameras and a bunch of internal sensors so that its ready for all manner of augmented-realityÂ shenanigans!

Sony announced that they’ll be pre-installing an app called ‘Party’ – this gives the Vita chat capability. So when you’ve just taken out a teenager with a headshot (on a game I mean) you can tell him or her how very much you rule! ‘Near’ is another app. This snoops into other Vita’s (or Vitae?) nearby and lets you see what games people have been playing, and rewards you with virtual game-related items when you check-in at geographic locations.

It almost goes without saying that the PlayStation Vita is hooked up with Wi-Fi connectivity but it will also support 3G. This is great as you can still download content, browse the interwebs and all that good stuff even when you’re nowhere near a Wi-Fi hotspot.

The sticking point is how will you be charged for your data usage, who will do the charging and how much it will cost. Is this going to be a monthly fee kinda deal or will Sony follow the good people of Amazon and make 3G more like FreeG as they did with the Kindle? No harm in hoping eh? 😉

Vita will obviously get access to a version of the PlayStation Suite as used by the Sony Ericsson Play. The Suite will let you download classic PlayStation titles and access the PlayStation Network (just be careful yeah?).

So long UMD and hello game cards. These little fellas are about the same size and shape as SD cards and hopefully, that’s exactly what they’ll be. But, as anyone that has ever used a Sony product, this is doubtful. Chances are that it will be some slightly odd Sony proprietary contraption.

Under the hood the PlayStation Vita is rockin a quad-core ARM Cortex-A9 processor hooked up to an SGX543MP4+ graphics unit. Apparently that’s all powerful stuff – my initial reaction is all that and the screen is gonna suck on that battery like Vincent Price on Barbara Shelley!

How Much and When?

The Vita will launch in Europe before the end of the year and cost â‚¬250 (Â£225) for the Wi-Fi-only version, and â‚¬300 (Â£270) for the 3G and Wi-Fi version. Chances are though that you’ll be nearer the mark if you swap those Euro signs to pounds. Vita is naturally going to be in the ring with the Nintendo 3DS which retails around Â£160 – so it would be fair to say that Sony will be keen to keep prices low.

Over in the states it sounds like the PlayStation Vita will be asking you to empty your account to the tune of $250 for the Wi-Fi only and $300 for the 3G version.