Sony PlayStation Phone is Real – This is it! 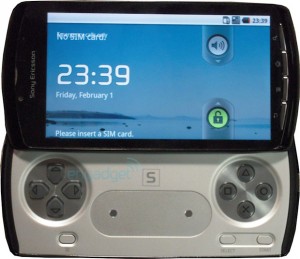 After a whole load of ‘will they? wont they?’ regarding the almost mythical Sony PlayStation Phone it was getting almost like a series of Friends!

Last month it was pegged for release next year – so what’s the latest news about the gaming phone?

Well – it seems that yes, they will be built and Engadget say that this is what it’ll really look like!

Apparently this picture is of a really real prototype of the PlayStation phone which will ‘soon’ hit the stores – soon being generally taken as 2011 sometime.

This PSP Go-esque slider will run some version of Android (there’s reports of 2.3, 2.5 or 3.0 so far), and will utilise an all-new Sony Marketplace where you’ll go to buy and download games.

Spec-wise it will be loaded with the ubiquitous 1GHz Qualcomm MSM8655 processor, 512MB of RAM and 1GB of storage (microSD card boostable).

As you can see – the 4-inch screen slips up to reveal the instantly recognisable PlayStation buttons. I don’t know about you but, as much as I enjoy playing games on my iPhone 4 – you just can’t beat physical buttons!

It’s nice to see that there’s almost no denying that a PlayStation phone is on its way – since 2008 I’ve regularly updated news about this fabled handset that should have appeared instead of the PlayStation Go if you ask me.

I’m guessing that the Qualcomm chip and the screen/graphics quality of smartphones now should make this gaming phone better than it might have been.

I’m still excited – are you?