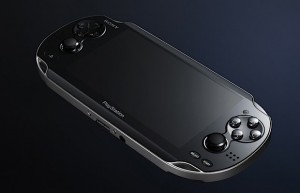 Sony made some announcements this morning and the first I’d like to report is that the next gen PSP2 is in fact called the Sony NGP.

The Next Generation Portable sees the PSP getting a second analogue stick as well as a humongous 5-inch OLED touchscreen rocking a superb 960×544-pixel res.

Gone is the UMD replaced by SD card-style storage. I very much doubt that the NGP will be using standard SDs – but you never know.

I don’t think anyone predicted this though: The NGP has a touch-sensitive trackpad round back.

Yup, the strokable controller is around the same size as the screen and using it in-game with Uncharted the touch-sensitive area on the back was used to impressive effect for more complicated moves. I’d like to test to see how intuitive this extra dimension to control is to use though.

NGP gets cameras front and rear so augmented reality games are good to go and it’s also equipped with 3G and Wi-Fi connectivity.

Sony also announced their PlayStation Suite. The Android games store will make available a raft of classic PSP and PSOne games. Your Google OS device will need to be running version 2.3 Gingerbread or higher – but this is another much needed boost to Android’s gaming world following the recent lead of Kongregate Arcade.

Obviously, a version of the PlayStation Suite will also be available on the NGP.