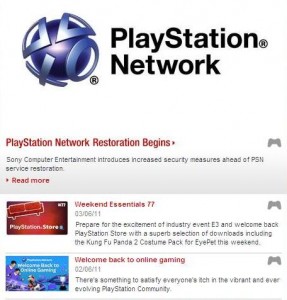 A day of mixed emotions for Sony today. First the good news: The PlayStation Network is back up and working. The not so good news: Sony has been hacked again and lots of users passwords and details stolen – AGAIN!

The news that plenty many gamers have been waiting for has finally happened. Sony has restored all the shopping functions and features of the PlayStation Network which means that, if you trust it, you can buy games, redeem vouchers, and use the Qriocity film and music service.

More importantly – as of today you can start to claim the free stuff Sony is offering as compensation for the huge downage and embarrassment caused.

European gamers can are offered the chance to download two free games, as well as free movies, choosing from Dead Nation, inFamous, LittleBigPlanet, Super Stardust HD, Ratchet and Clank: Quest for Booty and Wipeout HD Fury for the PlayStation 3, and LittleBigPlanet, ModNation Racers, Pursuit Force and Killzone: Liberation for the Sony PSP Go. Free identity-theft packages are also being offered to users, as well as extended subscriptions to premium services.

It has been reported that parts of Asia are now able to access the rebooted PlayStation Network too with the some countries patiently waiting their turn.

Whilst PS3 owners are dancing in the streets the hackers have been busy again. Using the same SQL Injection method which brought the PSN to its knees Sony was caught with its virtual trousers around its legs again and could only watch as hackers pinched the account details of over a million customers, including passwords, email addresses, home addresses and dates of birth.

This time it was the turn of Sony Pictures, the cinematic arm of the Japanese tech giant.

The hacking was perpetrated by hacker group LulzSec who stated that it was pretty easy.

“From a single injection, we accessed EVERYTHING,” the group wrote on its website. “What’s worse is that every bit of data we took wasn’t encrypted. Sony stored over 1,000,000 passwords of its customers in plain text.”

That’s fair enough but then they released a torrent file that it claims contains 71,000 email addresses and passwords from the hack. Hmmm… now that’s not fair for those users now is it?

The group Tweeted that unencrypted admin accounts, government and military passwords had also been nabbed. In the post on its website the group claimed that it successfully pilfered admin details of Sony Pictures, 75,000 “music codes” and 3.5 million “music coupons”.

Has your trust been shaken or are you still loyal to Sony? Let me know 🙂