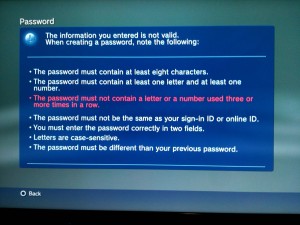 The previously hacked and killed Sony PlayStation Network returned to cries of jubilation only to crash and burn a few hours later.

Obviously there’s a load of twitchy gamers hurting for a hit of geekahol and when word got around that the PSN service was enjoying a gradual rollout ending around a month of downtime – the amount of people hitting it all at once forced Sony to switch off some areas of the network.

The announcement via the Official PlayStation Twitter stated: “We’re expereiencing (sic) a heavy load of password resets and will be turning off the services for 30 minutes to clear the queue,”

Anxious gamers attempting to get back to the online PlayStation community were met with an alert requesting all users to change their now invalid passwords before being allowed back. This is common sense as the hack saw millions of users have their private data accessed.

Sony also tweeted: “If you’ve requested your password reset, it’s taking time to clear all of the ISPs, so please give it a bit of time to reach your email.â€

The flooding of the PlayStation Network really shouldn’t be unexpected after a month of downtime. Do you think that Sony could have handled all of this a little better?

So – are you PlayStation owners looking to Microsoft Xbox Live yet?