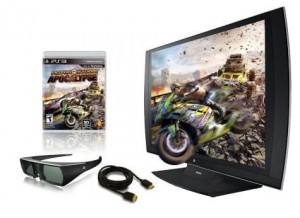 Looking into getting some 3D gaming on your home telly? Good news as Sony has confirmed that its PlayStation 3DTV will be coming to the UK very soon!

The TV is equipped with the “unique” SimulView tech which allows two different viewers to see two different images at the same time depending on where they are seated.

The screen is loaded with two HDMI ports round the back and the units stereo speakers feature an integrated subwoofer so you should benefit from some decent rumbles.

The Sony panel is set to cost £499 – for that you get a bundle that includes 2 sets of special USB charged active shutter specs and a copy of MotorStorm Apocalypse.

Back in June at the screens launch at E3 Sony hoped this would revolutionise multiplayer games – but they also said that they were working on the PS4. We shall see.

As for release dates – Sony wouldn’t give anything more away than Autumn. So, between almost now and November then?

Looking at Amazon.com you can preorder the bundle now ahead of its Dec 31 release.

Will you be hopping on board the PS 3DTV express or are you still not convinced?