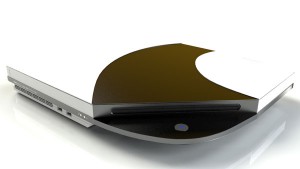 Sony’s next generation PlayStation has taken a bow well before any official announcement thanks to this PS4 concept design.

The official PlayStation 4 release date is being pencilled in for E3 2012 with thoughts of a shelf-date being wonderfully convenient for Christmas – but that does not stop a new concept design of the next PS console to be revealed – and thus possibly hinting at how the next Sony gamer might look.

This PS4 design comes direct from the brains of Joseph Dumary – his concept shows the PS4 following the natural evolution from PS2, to PS3 and to his design. Although you can tell its lineage under the hood would sit a 1.5TB HDD and Full 3D 4K2K (very high resolution) compatibility.

All of that would be paired with a next-gen Blu ray player, HDMI ports, USB 3.0 and the ability to synch with Qriocity and your SE blower.

Being eco-concious gamers you’ll be thankful to read that this PS4 concept is built from 60% recyclable materials with further green stars awarded for 0 watts power usage when sat in standby mode.  It would also be kitted out with an ECO Restart feature meaning gamers can resume games at the point they turned the console off at without requiring large amounts of power. Now let’s go hug a tree 🙂

Would you prefer to see a more revolutionary design for the 2012 PlayStation console?