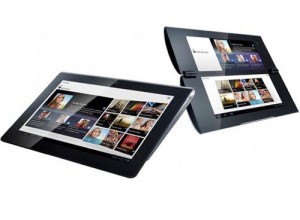 Sony has just officially revealed its Android 3.0 tablets and they both pack PlayStation certification as well as rocking the PlayStation Suite for PSOne gaming, Sony Reader eBooks and Sony’s new Qriocity streaming service for downloading and streaming music and video.

All that is wrapped up in two very different gadgety packages – iPad, are you worried?

So, seems that the Xperia Play is not the only bit of new tech to be wearing the PlayStation badge now then. Sony’s venture into the world of tablets has birthed the S1 and the S2 slates, although one is a huge step away from your usual tablet perception.

The 9.4-inch S1 is as you’ve read about here and looks like your standard tablet albeit with that curvy, wedged, raised bit that is said to make it feel and look more like an open magazine. As well as running Google Honeycomb the S1 can double-up as a universal remote control with the chance to share content via DLNA (Digital Living Network Alliance) – although this will only work on Sonyâ€™s Bravia TVs at the start.

The more interesting to look at release from Sony is the S2. Instead of rolling with just one screen, the new Sony is flaunting a pair of 5.5-inch screens within a clam-shell body! This means that you can probably get your PSOne gaming on in a DS-stylee as well as enjoying your eBooks in a more conventional format – the S2 is also packing DLNA tech for all your media sharing wants.

Both the S1 and S2 will land as 3G and 4G models and are similarly equipped with a Tegra 2 dual-core CPU which is probably a 1GHz unit.