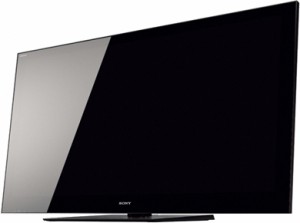 Sony has most definitely shown their allegiance to the 3D cause with its latest announcement of 3D PS3 games, Blu-ray player and TV.

The Sony HX903 will be Sony’s first move into the 3D TV consumer market and it will be available to buy in June.

The HX903 is equipped with Sony’s latest 200Hz high frame rate tech and will deliver a full HD 1080p picture with ‘High Speed precision’, ‘LED Boost’ and ‘3D up conversion’ all adding more def to the HD.

The tele is also packing wireless access to Bravia Internet Video and built-in Freeview HD – the only downside is that you’re going to have to sport some of Sony’s 3D active 3D glasses.

The alternative would be to wait a bit for the Sony KDL-LX903 3D TV which will have the dimension enhancing goggles bundled in.

If you are buying a HX903 don’t feel left out with the freebies! Hook up your PS3 and play the four 3D stereoscopic games (Wipeout HD, Motorostorm Pacific Rift, PAIN and Super Stardust HD) which come free with your new gogglebox 🙂

If you’re getting the new 3D television you’ve probably already bought your Sony BDV-E370 Home Cinema system that, with a software update, will playback your 3D flicks and provide surround sound audio.