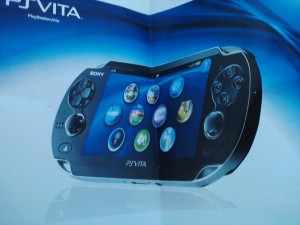 Itâ€™s been a little while since I scribbled anything about Sonyâ€™s Next Generation Portable, aka NGP – so howâ€™s about a possible name change and some cost-cutting to its spec to keep you updated?

Even though NGP could get confused with the group backing Prince in tunes such as â€˜Get Offâ€™ and â€˜Diamonds and Pearlsâ€™Â  it seemed to describe Sonyâ€™s aspirations for their successor to the PSP (PlayStation Portable).

Now, alleged images of a booklet which shows the PSP2 with a â€˜PS Vitaâ€™ logo at the bottom of the console with PS Vita branding appearing on the leaflet.

The domain names psvita.com and vita.scedev.com have also been discovered â€“ could this add further weight to the PlayStation Vita rumours?

The NGP, or Vita, is planned to use a flash card system instead of the UMD utilised by the outgoing PSP. Gamers will be able to download direct the device or buy game cards in stores.

It has also come to light that the next gen PSP is to have its internal memory capacity cut in half in a bid for Sony to release the Vita / NGP at a competitive price.

The unconfirmed rumour has the new PSP loaded with 256MB of RAM instead of the 512MB flaunted by Sony when the device was first unveiled.

A French news website is suggesting the sizable reduction in RAM will impact on the handheldâ€™s retail price â€“ allowing it to better compete with Nintendoâ€™s 3DS.

Is this all plausable?