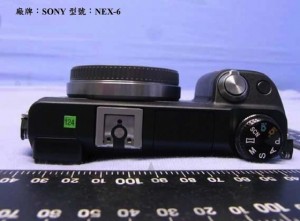 A pair of new Sony cameras have allegidly snuck out to give a wave to the interwebs. The two Sony NEX mirrorless cameras purport to be the NEX-5R and NEX-6.

The cameras appear to have new controls as well as sporting Wi-Fi stickers! Let’s check out these new-comers to the NEX range.

The NEX-5R is the follow-up to the NEX-5N and looks pretty much like its older sibling except for the additional dial up top along with a NEX-7-style Fn button.

This will no doubt be a welcomed addition by those who love to go manual.

The NEX-5R seems to have helped itself to the NEX-F3’s 180-degree tilting screen too.

Alpha Rumors reckons that the 5R will have a new 16-megapixel sensor with onboard phase detection autofocus, along with Wi-Fi connectivity that enables support for apps and web browsing.

“It has WiFi connectivity and APP support. You can surf on Internet with it”

The NEX-6 will aim to nestle ‘tween the 5R and the swanky NEX-7.

It shares the 7’s looks but the 6 has stacked the dials on top of each other.

Most lens-monkeys will love the fact that the NEX-6 is loaded with a standard hotshoe mount instead of the Minolta-compatible unit found on the 7. That’s how it looks anyhow.

VR-Zone guesstimates that the NEX-5R will sell for about $700, whilst the NEX-6 will hit you up for somewhere around $1000.