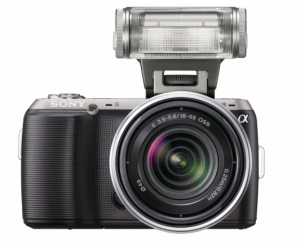 After the rather shocking news that Sony decided to discontinue their NEX-3 micro four-thirds camera after just eight months there may well be a reason behind it.

That reason could look a lot like the picture you see here before you.

This is reportedly the NEX-C3 which looks to be packing the same 16.2 megapixel image sensor used in the Sony Alpha A55 DSLR, as well as HD video capture and a brand new flash.

These leaked snaps show a tiltable LCD as adored on the NEX-3 and some minor tweakage to the camera controls.

Rumor has it that Sony originally intended to announce the NEX-C3 earlier this month but, obviously, this has been delayed due to the Japanese earthquake.

Price and release details have yet to appear but I’d reckon that the NEX-C3 will take off where the NEX-3 finished as a price guide.