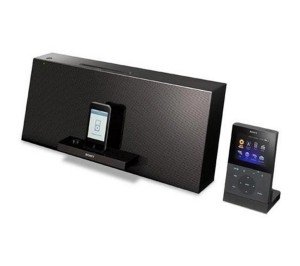 Last night a rather large package was delivered to me from Sony.

What I unpacked was a typically understated but rather large iPod docking station that goes by the name of NAS-Z200iR – catchy eh?

Calling it a docking station kinda undersells what this chunk of Sony can do though.

If you don’t feel like slotting in your Apple player you can opt to be serenaded via the vertical slot CD (plays CD-R and CD-RW) player, USB port, the audio-in port or AM/FM radio.

Not only all that but this dock packs Wi-Fi which lets you stream music from your PC as well as Internet radio! Ta-daaaaaaaa! 🙂

I have to admit though – when I was unpacking the NAS-7200iR I just wanted to have a play with the bundled remote – this control centre features a built-in 3.5â€³ color LCD display which makes selecting tracks a doddle.

Even though I couldn’t see anywhere that says my iPhone would or wouldn’t dock (it only mentioned iPods) I decided to try it. A message did flash up on my iPhone telling me it wasn’t compatible but after a few seconds the list of artists, albums, song titles and play lists all came up. I feel I should mention that I discovered that you can select the remote to be in a range of languages as mine arrived ‘speaking’ Spanish – HEheheheh!

The remote recharges when its sat in its own docking station so no changing batteries which is good. Having been brainwashed by touchscreen gadgets I kept on wanting to navigate the remote by prodding and stroking the screen instead of using the buttons to select my options. Perhaps if Sony produces a new model it may be touchscreen version….. please?

If you’re lacking desk space the NAS-7… can be wall mounted thanks to a VESA wall bracket which may be handy as this thing isn’t tiny! It measures: 217 x 220 x 535mm.

To be honest, I’m generally underwhelmed by iPhone/iPod docks on the whole – unless I’m willing to fork out a rather large sum of cash.

I was pleasantly surprised after selecting a few different tracks from my iPhone and some mp3’s stored on a USB stick that the sound that came out was punchy (although seemed to favour the bass-end of things) and pretty darned loud!

According to the paperwork that will be down to the pair of independent speaker enclosures that house each a 25mm soft dome tweeter and 100mm double neodymium bass driver which adds up to delivering 40W total power output. Nice.

The remote control though is the talking point. It is one of the best I’ve seen in a while and the clear, user-friendly interface on that large screen makes selecting your mood music a joy.

At the time of writing this review the Sony Store didn’t have any but if they did it would cost you Â£600. Good news is that you can grab one from Play for Â£400 brand new and there’s a few ‘next to new’ ones around on the interwebs.