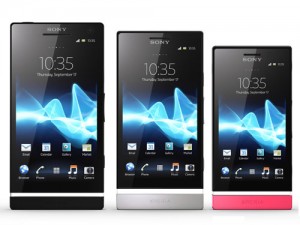 Sony has definitely made its presence felt at the Mobile World Congress as it unveils its NXT series of Ericsson-less phones.

The brand new Sony Xperia P and Xperia U joins with the Xperia S to form the Sony supergroup: Xperia NXT series.

Sony Mobile’s 4-inch Xperia P is kitted out with an aluminium unibody case which has been given a “WhiteMagic” display for enhanced contrast and brightness. Smart power efficiency automatically adjusts the brightness of the screen to the surroundings to conserve battery life.

As with a few new smartphones at MWC 2012, the Xperia P will confusingly land with Android 2.3 (Gingerbread) on board – Sony does plan for an Android 4.0 (Ice Cream Sandwich) upgrade by the summertime.

The slightly smaller Xperia U has been gifted by Sony’s mobile music background.

As the U is about music its has to settle for a 5MP camera and is also looking forward to the summer months for an update from Gingerbread to Ice Cream Sandwich.

The NXT series all come with the same distinctive transparent stripe that the Xperia S sports – the Xperia U has a special trick, however. Its transparent element illuminates to match the colour of photos viewed in the gallery or the album art of music tracks currently playing. Snazzy, huh?

The Sony Xperia P and Xperia U are both powered with a 1GHz dual-core processor. The Xperia P has an optional SmartDock that Sony hopes will turn it into a set-top box and occasional computer.

The Xperia S, is now shipping to markets across the globe, with first sales in the Sony Style store in Barcelona during Mobile World Congress. Xperia P and Xperia U will be available to consumers globally in the second quarter of this year