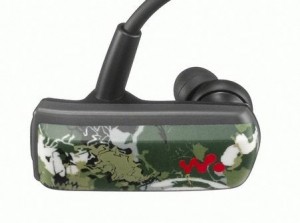 The model comes clad in camouflage but I’m not entirely sure that it will increase your power to sneak around.

The Metal Gear: Solid Peace Walker Walkman W252 will come bundled with 6 pre-loaded music tracks from the game as well as an in-carton code to unlock new characters.

The Walkman product placement goes deep in the game with iconic versions of various Walkman models littered about the place – including the first ever Walkman cassette player from back in 1979…….. ah, the memories……

The Metal Gear Solid: Peace Walker Walkman W252 (phwew!) is wireless so there’s no risk of getting it all caught up in barbed wire or your mid game pizza. It packs 2GB of storage which is enough space for 470 songs and has a three-minute quick charge function thatâ€™ll give you 90 minutes worth of juice.

The Walkman W252 is able to put up with the British weather when you’re out for a run as well as the sweat of a gruelling gym session. After exercising, just rinse under the tap or even keep plugged in during your shower.

Sony hasnâ€™t announced how much the camo’d version will cost but the standard ‘civi’ Walkman W252 is available now for around Â£49.

Metal Gear Solid: Peace Walker is scheduled for release on June 18 and expect these Sony earpleasers to break cover around the same time.