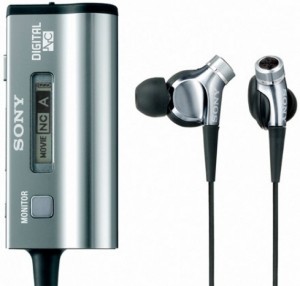 I feel that I should be fair and state at the start of this review that I’m a headphones not an earphones man.

So, when I received a package containing Sony’s catchily named MDR-NC300D noise cancelling earphones I couldn’t help but pity the little mite.

I’ve never bothered with noise cancelling cans as I generally go for the enclosed style which blocks most ambient distractions and, when I’ve got music playing, is usually enough to segregate me from the real world.

My other grumble with earphones (apart from me not being overly convinced that we should have a sound source actually in the ear) is that most earphones fall out – and keep falling out.

Now that I’ve got all that off my chest let’s have a goosey at these MDR-NC300D’s shall we?

I noticed on the box that Sony is being very up front about the earpleaser’s noise cancelling attributes and is not promising to eliminate all noise – rather the gentlemanly fact that these MDR-N….should I just call them 300D’s? The 300D’s offer up to 98.4% noise reduction.

The noise cancelling cleverness is achieved through the little mics on the back of the earpieces which capture the surrounding clatter and that’s then processed through an Artificial Intelligence noise-cancelling feature which is the same that’s featured on Sony’s top-end systems. In basic terms it samples the noise outside and then hits it with exactly the opposite frequencies and thus cancels the noise.

All that processing is done, I gather, in the in-line remote which also controls a number of settings including the NC level, some EQ presets as well as the volume. I like the ‘Monitor’ button which, with one hit, stops your audio and uses the mics so you can safely cross the road or listen in on people’s conversations. A snag is that all that uses a AAA battery which is said to offer around 20 hours of joy. I’ve had the earphones for a week and the battery indicator is showing that it’s down to its last bar.

Sony, bless them, seems to understand my pain and realises that when it comes to ear-buds one size rarely fits all. To solve this problem these noise cancelling buds comes with no less than seven sets of ear tips. To prove a point; I use a different size on each side. Well, c’mon – who here is perfectly symmetrical?

Also in the box was a velvety bag for storing your 300D’s in as well as a rather natty ‘leather’ holder that is designed to hold a spare battery, an adapter for aircraft audio sockets, garment clips, ear buds and of course, for storing your 300D’s away when not in use. This really made me feel that I had in my ears a premium product. See the pic in the gallery for contents 😉

The sound, once I found the right earbud combo, is really good. Nice tight bass and clear mids and trebles were reproduced and having a volume control outside my jacket meant that I didn’t have to keep flashing my iPhone around in rather dodgy districts.

I found the cancelling rather good and real handy when squawking kids are intent on ruining my reading Club Dead by Charlaine Harris whilst on the tube.

Apparently the 300D’s are not only Sony’s first digital noise cancelling earphones but the world’s first NC earbuds and, to be honest, they’ve done a rather spiffing job and I can see these appealing to commuters and frequent flyers who wish to cut out the jibber-jabber and incessant noise inherent with public transport but don’t want to be carting full cans around with them.

Personally I’d love to try some headphones using the same tech as a comparison as I’m finding it hard to ignore the fact that these are earphones. Also, I reckon an improvement would be to allow the earphones to be used without the noise cancelling when in quieter situations with a bypass so that the battery life could be extended. Better yet, have the thing be rechargable via wall socket and/or USB.