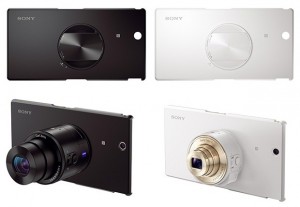 The Sony Xperia Z Ultra is a large and decent phone but it has been missing out on the joys brought by the QX10 and QX100 lens-style cameras. But that is set to change.

Sony’s QX10 and QX100 lens-style cameras appealed to many Android owners but not every Sony device works with them, namely the big Xperia Z Ultra.

The phablet was left out because it was too big for the case carrying these two cameras and so left the QX cameras only being used remotely and not mounted directly onto the Xperia Z Ultra.

Sony plans to make these nifty cases  that add QX10 and QX100-styled backs, specially moulded to an Xperia Z case.

Whether or not this new appendage proves useful for the over-sized blower is yet to be seen.

The handy accessory has been announced in Hong Kong where users will be able to buy one for HK$238, which translates to $31-ish.

No word when this case will hit the Western hemisphere, or if at all, but I think it’s a safe bet that it will get an airing at CES in Las Vegas.

Hopefully by then I’ll know more details such as its European availability and pricing.