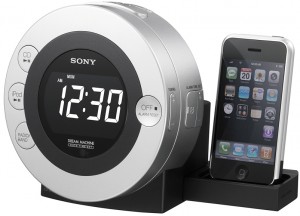 Now, as far as I’m aware, Sony still make their own brand of MP3 player.

But they’ve decided that they need to build a dock for that relative ‘Johnny-come-lately’ Apple.

Sony’s newest Dream Machine, the ICF-CD3iP, has been sprung by Sony Insider.

The iPhone/iPodClock/Radio Dock isn’t ugly and will probably be of decent quality (unless Sony want to make the Apple products sound bad) and will be priced at a reasonable $100.

With any audio product it’s difficult to review until I’ve actually heard it but I’m thinking it isn’t gonna be fantastic but sound like a half-decent clock-radio-mp3 player.

SI mentions the that it has an iPod/iPhone remote, and that its alarm can co-exist with iPhone/iPod alarms – so that’s handy.

It’s also packing an MP3 playing CD player and it has a line in to boot!