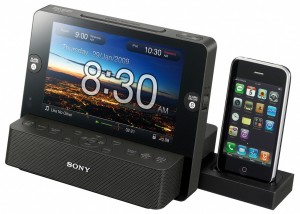 I’m a fan of gadgety convergence – especially when it makes sense. Just look at the Tefal Toast n Egg 😉

So when I was told that I could have a test run of a clock radio I was a bit like ‘wow – that’s never been done before! I bet it doesn’t even make me a coffee.’

But then they said that not only was it a clock radio, it was a digital photo frame and an iPhone dock and charger. It sounds like an ideal bedroom buddy.

Looking at the Sony ICF-CL75iP I could tell that it wasn’t cheap tat and it seems well designed with a hide-away dock and a good sized, clear WVGA display.

The snooze button is exactly where it should be and is large enough for that half-hearted, half-aimed slap that befalls every snooze button around the world.

I commenced with what I call the ‘bloke test’ – in other words I fired it up and tried to stumble around its functions without breaking out the instructions – or breaking the Dream Machine. The UI (user interface) is pretty intuitive and I was soon tuning in radio stations, changing the size of picture and clock being displayed and so on.

What I did notice is that the ‘options’ button can be hit at any point and it’ll magic up a pop-up menu on the right. It’s handy to know as it gives you quick shortcuts to your alarms as well as playing vids 😉

Round the rear of the Dream Machine is where you’ll find the USB port and the memory card slot so you can feed it with your own media.

This clever thing can play videos as well as music and flicking through pics. When you want to sling some media the DM will ask you where you want to access the files from. Your options are from the internal memory (built-in 1GB), memory card slot or the USB. Now, I was a little disappointed to discover (I even checked the instructions) that there wasn’t an iPhone/iPod option here – more on that later 😉

The radio function boasts 30 slots (20 for FM and 10 for AM) for your preset stations and has all the functions that you would need from a radio – frequency scanning, being able to set the radio station you want for your alarm, etc. No grumbles from me regarding the sound quality at all.

Browsing photos on the ICF-CL75iP is great and will easily replace any digi-frame.

When your iPod or iPhone is docked (just give the dock a little press and it’ll ‘soft-eject’ slowly out half-way), it will be charged by the ICF-CL75iP. Additionally, you will be able to browse your iPod using the ICF-CL75iP’s menu keys. You can of course also change tracks, control volume, etc but it refuses to grab pics or flicks from your Appley device

You can import pictures, music (AAC-LC, MPEG-3, PCM) and videos (MP4, AVI) onto the Dream Machine’s internal memory via USB and memory card but, again, not from your iThingy. On a plus side you’re able to select multiple files and import them all together.

If you do get one of these do-it-all devices don’t tell your boss. Why? Well as well as being able to set two different alarms (handy for different shifts or for you and your partner) Sony has added a backup battery supply so that if you fall victim of a powercut after you’ve set your alarm it’ll still be ready to wake you from your slumber.

The alarm settings cover all bases as well. You’re able to set the volume, date and the sound of the alarm. Those alarm ‘sounds’ can come from the radio, iPod/iPhone or you can even add customised sounds that you record for yourself using its built-in microphone – yup, just let your imagination run!

Looking at Sony’s ICF-CL75iP it’s so much more than a clock radio and from what I can see Sony have thought about everything (pretty much) and shoved it all in something that will look great in any bedroom. It’s large enough to be useful and small enough to fit on any bed-side surface.

I reckon that the £120-£150 asking price (depending if you go to the Sony Store or not) is a fair deal for a digital picture frame, radio, alarm clock and iPod/iPhone dock from Sony.