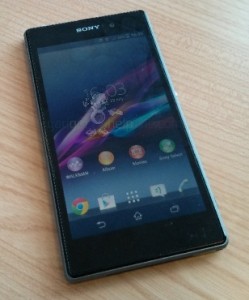 It looks like it’s leaky smartphone news day with these latest pictures showing a smartphone that bears a family likeness to Sony’s current Xperia smartphones.

Sony has been rumoured to be tinkering with its latest flagship Xperia in the form of the i1, codenamed Honami.

Word has it that that the Xperia i1 will be packing a huge 20 megapixel camera (still not as big as the mental Lumia 1020) as well as other goodies.

Although the public launch of the phone is likely to still be a way off it is said to be equipped with a five-inch full HD 1080p display and be powered by a 2.2Ghz quad-core Snapdragon 800 processor. It is also expected to feature 2GB of RAM, a 3,000mAh battery, 16GB of internal storage and a microSD slot.

The expandable storage will be handy for saving images and video captured by that 20-megapixel snapper which is rumoured to employ a high-end 1/2.3-inch ExmorRS sensor. The front will feature a two-megapixel camera.

As with Sony’s existing Xperia range, the i1 is expected to be both dust and water resistant.

Sony is expected to officially unveil the smartphone at IFA in Berlin on September 4th.