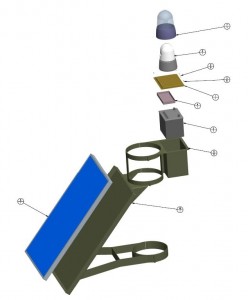 Sony Europe is helping a young team in its bid to stop the devasting effects of wildfires.

The team of six, whose â€˜Forest Guardâ€™ idea won the recent Climate Actions contest, were invited to Sonyâ€™s headquarters in Basingstoke to work with Sony engineers on making their idea come alive for the first time.

The team behind the innovative â€˜Forest Guardâ€™ concept are from Northern California where forest fires are rife and they are keen to highlight that the carbon dioxide emitted during these fires can equal that produced by several million cars on the road in a year.

They travelled over to Europe to present their impressive wildfire detection solution using a network of solar-powered CCTV cameras and citizen fire watchers over the web to obtain advance warning of these fires before they manage to spread and cause a devastating impact.

The team spent a couple of days with the Sony specialists in order to hone and refine their idea where they were actively involved in the workshops and brainstorming sessions.

Morgan David, Divisional Director, Research and Development (R&D) at Sony lead the team of engineers that worked with the team to develop the â€˜Forest Guardâ€™ technology: â€œWe were really impressed by this innovative idea and felt we were in the perfect position to bring our knowledge of technology and engineering to the project and help them make it into a reality. To help solve problems to climate change through technology is at the heart of Sonyâ€™s philosophyâ€.

The Forest Guard team were winners of the Climate Actions contest at this yearâ€™s Childrenâ€™s Climate Call competition held 1st â€“ 3rd May in Copenhagen, Denmark organised by the LEGO Group and FIRST Scandinavia. The competition attracted over 140,000 children and teenagers from more than 40 countries, 700 of which took part in the European finals in Copenhagen.

Sony was a partner with the Climate Actions contest and it was here that the plan for Sony to give the â€˜Forest Guardâ€™ the benefit of its experience and expertise came together.

The problem of forest fires is not something solely limited to the United States; a recent spate of wildfires across Southern Europe and in Canada has highlighted the real need for something to be done to prevent the spread of these potentially deadly fires.

Check out the behind the scenes vid below and well done to the Forest Guard team!