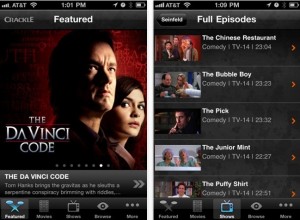 Free streaming films and television series on your iPad and iPhone – how could you not want that? Better still… even the app is a free download!


Sony has just this very day released Crackle – this free iPhone and iPad app streams full-feature movies and popular TV shows direct to your portable Apple all for gratis.

You’ll get free TV shows such as Seinfeld and Married with Children along with hit films like The Da Vinci Code and Stranger Than Fiction – all squirted to your iPhone and iPad – did I mention this is all, well and truly, for free?

If you’ve ever visited Crackle.com you’ll be familiar with the advert supported streaming service and those ads are equally present on the app. Surely a small ‘price’ to pay when you get a catalogue of flicks from Columbia Pictures, Tri-Star, Screen Gems, Sony Pictures Classics and a number of other studios.

The more cinema-aware and picky telly viewer may turn their noses up at the lack of bang up-to-date blockbusters (but there are some classic Jackie Chan and Chuck Norris flicks!) but this aint Netflix or Hulu – but it’s also F R E E ! ! !

It is in fact hard to knock anything about this app – The Crackle app costs nothing and the picture quality is sharp on my iPhone using my home Wi-Fi connection. Crackle on the iPhone is easy to find your way around and so is finding something to watch.

Go on – slip over here and download that sukka!