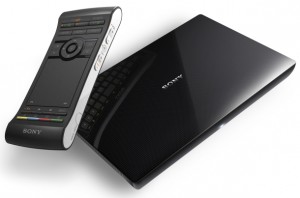 Been waiting for Google TV? The first GTV set-top box has arrived! The Sony NSZ-GS7 Internet Media Player with Google TV is on sale today and is ready to turn any television into an Android-powered Internet media centre.

Google TV is the software which has the ability to turn your TV in to an Android app loaded, internet connected media server.

It comes loaded in a Sony Internet Media Player box, which plugs into your TV and gives you proper web browsing with Chrome and access to a host of Android apps optimised for TV-sized screens.

If you’re the kind of person (like me) that enjoys multitasking — checking the interwebs in slow bits of films or telly programmes — then the Sony Google box has a neat trick for you. This feature allows you to shove live TV into a little window on your screen while you’re using an app.

This means you can scuttle over to Imdb to find out that actor’s name, see what people are Tweeting about or see how many Facebook friend requests you’ve mustered in the last 10 minutes – all whilst keeping one eye on the minimised box showing the latest True Blood/Walking Dead/Coronation Street; whatever you like.

150 apps have been readied for the TV screen with the baked-in apps including Chrome, YouTube and the Android app market, Google Play.

BBC iPlayer is promised for just after launch, but there’s no currently no sign of Netflix or Lovefilm, Amazon Instant, Hulu Plus or even Google’s own movie rental service being supported. Majors such as ABC, CBS, NBC, Fox, Comedy Central, and MTV still block Google TV’s software from streaming browser-based video – as the NSZ-GS7 is more expensive than Apple TV, Google had better get this sorted.

The Internet Media Player comes with an impressive double-sided remote, which actually knows which way round you’re holding it so as to avoid accidental button presses. This is not a remote for people that believe less is more. A minimalist remote, this is not.

The Sony remote packs a backlit QWERTY keyboard on one side; flip it over and you’ll find a trackpad, D-pad, and Android-style home, menu and back buttons. It looks a bit complicated but I am sure after a few moments with it, the remote will make complete sense.

The Sony Internet Media Player with Google TV costs around £200. You can pre-order it today for delivery on 16 July, that’s the day when it hits the high street stores.

If you’re looking for a new Blu-ray Player then the NSZ-GS7 3D is equipped with that very flavour of disc-spinner along with Google TV – that lands in October and will cost around £300. I’m guessing by the name it will also be 3D-ready.