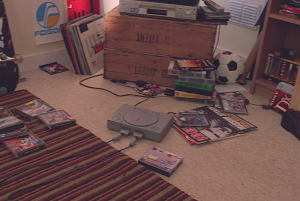 Are you game for a trip down memory lane? It certainly appears that Sony is as it has posted an over-the-years video compilation of its best-selling console.

Starting out with the PlayStation (a.k.a PSOne) in 1995, the video shows a group of university-age gamers in London as they go about their regular lives, listening to music and doing a bit of gaming.

After that, the video smoothly time warps past the parties of 1999 to the year 2000. The gamers are the same people, though they haven’t aged (Timelords?). They are wearing the style and listening to the music of the new millennium. They’re also playing super-selling, thanks to its DVD-playing abilities, PlayStation 2.

The video then goes to 2009. The same gamers are of course playing with the PlayStation 3.

Each time transition shows the culture changes between years, but the console at the cente of the dorm room never changes. Sure, the console model varies, but each time it’s always a PlayStation (beneath a Sony television, obvs).

The video ends in a very future-fancy dorm room setting: Blue-ish lighting, lots of sleek technology, but with those same gamers. The main thing to change? They’re now rocking PlayStation 4 beneath a Sony HDTV.

The PlayStation 4 was officially announced as the successor to PlayStation 3 in February and it will launch on November 15th in North America and November 29th in Europe and Australia.