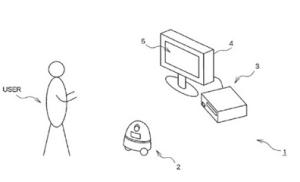 Sony has apparently filed a patent application thatÂ shows and describes a little bot buddy for the PS3.

The PS3 robot would sport a camera, display, GPS, Gyro sensor and a microphone.

It looks as though the robot will be able to roam free about your abode autonomously.

Perhaps attach a target onto your pet and watch the battle between bot and animal in a game of laser hunting!

The only thing missing is what it will actually be able do and what its purpose actually is – probably not the pet taunting idea I’m guessing.

Japan loves robots and already has plenty of companion bots that pack Wi-Fi to get stuff from your puter or the interweb – I’m guessing a PS3 hooked robot will be able to do the same.