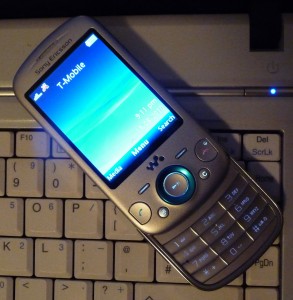 Yup – It’s been a while since having a mobile that will play music AND take photo’s would cause me to go WOW!

So, when I was asked to take a look at the chacha silver SE handset I thought – why not?

Thing is that I’ve grown accustomed to touchscreen smartphones. Fortunately, my lovely lady has been a huge fan of the works produced by SE and currently is using a Cybershot C902. I have therefore enlisted her to give her opinions on the usability and functionality of the Zylo.

The Sony Ericsson Zylo W20i is a Walkman branded slider handset that measures 103 x 52 x 16mm and weighs in at a pocket-friendly 115g.

The rounded edges were described by chief-tester Karen as being “girly” and “feminine” and very comfortable to hold. More so than the C902.

Personally I think that the handset looks rather basic and is possibly aimed at the younger end of the market or perhaps at those that don’t want/need an overly fancy phone. We both liked the silver with turquoise embellishments of the chacha silver version we had.

Karen pointed out that the slide was smooth and felt sturdy enough to withstand life in a handbag. This reveals the 12 key pad which again were noted to be easier to use than the small square keys on the C902. Texting was a breeze – although sometimes the keys could be a tad over sensitive. Well, that was the excuse when I received odd messages.

The screen does the job but wont set tech-heads sprinting to the order button. The Zylo is equipped with a 2.6-inch display with a 320 x 240 pixel res.

Around the back you’ll find a fixed focus 3.2-megapixel camera. It will also allow for taking 640 x 480 flicks at 30fps. Again – capable but these numbers wont be the reasons that you’d buy this phone.

There’s more social networking stuff to be had with the inclusion of a Facebook app which can add a widget onto your homescreen for quick access. You also get sharing options, so you can send a photo out to Twitter, Facebook or your web albums, as well as via the more usual email or messaging.

Email is supported but I found it hard going which is odd as slinging texts off was a no-nonsense thing and I had forgotten how good the predictive text was on Sony blowers.

All this data stuff slips through thanks to 3G HSDPA and Bluetooth connectivity – no Wi-Fi here though folks.

Now, this is a Walkman phone so this should be a winner on the audio.

First thing I noticed was the distinct lack of a 3.5mm jack. I’m sorry but this has gone on long enough!

I remember my old W810i which I loved but not having the option to attach my favourite cans to the phone was the reason that we could not last.

As if to rub salt into the wound SE have bundled some hard plastic earphones in with the Zylo and then brag about it supporting FLAC (for lossless audio). There is a caveat to this audiophile standard though – if you want to actually enjoy quality audio you have to buy some expensive Sony earpleasers: “Complete your Zylo with a premium headset and enjoy a clear audio experience (not supported by included headset)”. Hmmmmmmmmm………………..

Out of the box I found the Zylo and bundled earphones produced a bass heavy range that lacked in definition with average mids and trebles. Fine for blocking out chit-chat on the tube and bus but as a music focused phone a little less than I imagined. Perhaps it really needs that premium headset.

Talking about music on the bus – good news if you’re one of those annoying little gits that insist in sharing their rubbish music-taste to all as the external speaker kicks out a very decent amount of volume without it sounding like it’s eminating from a tin-can.

Control your tunes via a button on the right-hand side which launches the music player where the central four-way controller has a play/pause symbol in the centre. Media is presented using Sony’s Xross Media Browser which is simple to use and yes, I am a fan of.

Battery life is very good at 26 hours of music listening and up to 4 hours of talk time. Karen was very pleased indeed by the longevity of the battery especially when making a great number of calls with the Zylo.

Oh yeah. Calls. This is a phone after all.

The calls are “a lot clearer” than the C902 and the only thing was that when you closed the slider it will lock the phone but it wont end the call which caught Karen out once or twice.

All-in-all then. A decent basic blower. It feels sturdy and is comfy to hold. It’s great for texting and calling but a little disappointing on the audio front for a Walkman branded phone.