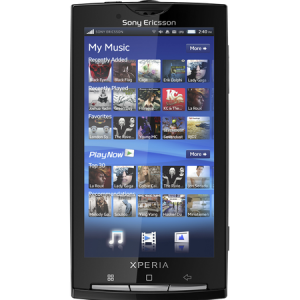 A Sony Ericsson Xperia X10 has landed on my desk.

The phone has been out for a little while, I first met the X10 back in February, but this has been my first chance of living with one.

It’s a nice looking phone with its 4-inch screen and I know that there’s 1Ghz Snapdragon processor under the hood so it shouldn’t be a slouch. It also runs Android so this is my first real world test of living with Android as well. The X10 sat with me is running on Android 2.1 (Eclair) which adds the bonus of HD video recording with continuous auto-focus, 5 homescreens, a new back up and restore application and a new phonebook which automatically syncs contact pictures from Facebook etc.

The large screen gives everything a nice space to live in and also hands those with wider fingers (arf!) a chance at hitting what they want – always an advantage for navigating menus and such. The large screen is also a joy to watch videos on.

I can see how those with smaller hands may get a sense that the X10 is too big. It sits in my hand nicely but then I’m a bassist and have decent sized hands and longish fingers (see gallery) but my chief SE tester, Karen, got used to its size within 24 hours living with it.

Moving onto the rest of the phone design and there are some really nice ideas. One is the neat little LED at the top of the phone (which goes red when charging and flashes green when you have a message) is handy but I think Sony Ericsson may have been too subtle with it. I missed a couple of texts when it was on silent as I’d not noticed the tiny blinking green light.

Joy of joys though! An SE phone that sports not only a 3.5mm standard headphone jack but a MicroUSB port on the top of the phone! I also like the simple but effective touch of the power button doubling up as the screen lock.

Over all I reckon the phone looks very modern in a classy, minimalist way. Karen classes it as youthful but grown-up. Both are meant positively 🙂

There’s a difference of opinion when it comes to the subject of Timescape though. I’m digging the stack of tiles that gives a history of action or method of communication – you can spy Twitter updates, songs listened to, texts, photos, all in one long line or, when you flick left or right, you can see them in their own little Splines. This means you can just have a stack of your texts, or just your Twitter updates which you can flick through in a very cool ‘Cover Flow’ kinda way. Karen would prefer to see texts in the more conventional conversation style – as it appears when you actually go into ‘Messaging’. Each to their own.

We both agree that the X10 is great to use though – the menus all make sense and we were both able to set the phone up to our preference without reaching for the manual. Karen really likes the live wallpaper 😉

The virtual keyboard is pretty darned good and use in both portrait and landscape is a breeze. Should the attack of the sausage fingers occur then the rather spiffy autocorrect function will soon suggest the correct word up on the ticker-tape type display.

The Xperia X10’s 8MP camera is a good one and comes complete with autofocus, touch focus, image stabilisation, geotagging, face and smile detection and apparently an LED flash. Now, I can see the light and you can turn the camera light on and off but I’ve not yet been able to get it to flash. I’ve checked to see if there’s the usual flash on/off/auto option in the menu but can I heck find it. The photos are good quality and you are able to alter the brightness which is good as I can’t get it to flash. Video is pretty good – it didn’t blow my socks off but it is more than usable considering that this is a phone.

Surfing the interwebs is as you’d expect having that 1GHz processor. Pinch to zoom is lacking but word is that the X10 will, in fact, get multi-touch in the first quarter of next year. Rumour has it that pinch-to-zoom will be enabled for browser and maps, but “situations like when the movement of the two fingers cross each other on the X- or Y-axis that could cause strange behavior.“. Apart from that it’s all quick and easy to use and the X10 has intuitive internet navigation.

Finally the Mediascape – like Timescape but for media (clever eh?) you get this split into, Photo, Video, and Music.

This area is another great piece of work and the icon based display makes it nice to use and tapping the infinit button hands your a range of information regarding the Artist/Track via your browser, and the PlayNow interface allows you to instantly buy new music.

It is a worthy phone and it is rightly sat at the top of SE’s tree. I wouldn’t hesitate to give it a glowing report if I could just work out what happened to the flash.

The screen is great and the X10 is definitely aimed at the multi-media market with good video and audio playback. Extra points for allowing us to use our favourite headphones for a change!

When pinch to zoom and Android 2.2 (Froyo) come to the Xperia X10 sometime in the first half of 2011 they’ll make this a very good choice of smartphone indeedy.