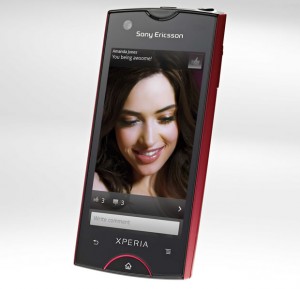 The Sony Ericsson Xperia ray is a handy, pocket-sized, fully fledged smartphone – think of it as the offspring of the SE Neo and arc whilst being almost named after the Play and you’re not far off.

The ray (I’m not sure if I’m digging the SE lower-case names or not yet) goes against the current trend of bigger is better with its 3.3-inch screen packed into a 9.4mm-thick case.

It might not be quite a handful but the ray does run Android 2.3 Gingerbread – so getting your mits on all the latest apps and games from the Android Market shouldn’t be an issue. Mind you, you’ll probably need good eyesight and thinnish digits when playing those games – at least they’ll still look sharp with the 480×854-pixel screen res.

Under the hood purrs the expected 1GHz processor but it seems that everything else has been pilfered from the Xperia ray’s bigger sibling – the Xperia arc.

Starting with the camera – the little ray is equipped with the impressive Exmor R sensor which has wowed me and most other folk with its low-light snapping abilities. You get the full 8.1-megapixel outfit on the ray.

Fancy stepping out with what could possibly be the smallest Bravia TV? Well, here’s another goody that had me amazed on the arc – the ray gets the Bravia engine and Reality display which really does make videos pop!

The only thing I can see missing is the HDMI connection.

The Sony Ericsson Xperia ray is out in Q3 in a choice of black, white, gold and pink hues.