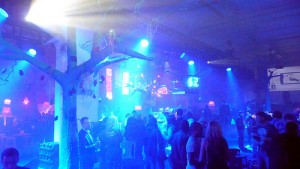 Last night Tinchy Stryder and Jameela Jamil partied amongst gadgety fans and party goers in what I can only describe as being an oriental post-apocolyptic rave.

It was, in fact, the Sony Ericsson Xperia PLAY Rooms which had appeared for one day only to launch SE’s PlayStation branded Android blower.

There were plenty of Xperia PLAYs to fondle and it was quite surreal to be playing the Bruce Lee fighting game amidst a fluorescent blue forest, burnt out helicopter, American muscle car and a Shanghai street bar.

Tinchy Stryder perfomed a pretty decent set although his DJ, Spiro, dropped a bit of a clanger when he announced that the party was here for Sony Nokia Ericsson….. but I think he believed he recovered well 😉

â€œIâ€™m a big gamer so itâ€™s great to be involved with the launch of Xperia PLAY. I spend a lot of my time on the road, so to have a mobile with a PlayStation gaming pad is cool.â€

â€œI got to launch an awesome gaming phone and hang out with Tinchy, although he needs to learn to be a little bit less competitive when it comes to playing games.â€

Everyone there from Sony were confident that the recently troubled PLAY would launch this morning without issue and the handsets I tested seemed to work just fine.

Sony Ericsson has formed partnerships with over 20 developers from big publishers to independents, from middleware providers Havok and Unity to engaging Android developers, to ensure a steady flow of new titles for Xperia PLAY. Some of the highlights include:

In addition Sony Ericsson confirms that Asphalt 6 â€“ the latest instalment of one of the leading and top-selling racing games will be available for free exclusively on Xperia PLAY.

Â· Cool Boarders 2 â€“ Time to pick up that snowboard again and rip through the snow with 16 intense racetracks.

Â· Destruction Derby â€“ Original car carnage. Buckle yourself into a new car and destroy it but send your opponents to the junkyard first.

Â· Jumping Jack Flash – A first person platformer like no other. Leap around 6 colourful worlds in the cockpit of a robotic rabbit, hunting for the evil galactic property developer Baron Aloha.

Â· MediEvil â€“ Resurrected 100 years later you have returned to defeat the sorcerer Zarok. Perhaps the world’s least worthy hero, you set out to save the land once again–for the first time.

More games from Sony Computer Entertainment will be added to Xperia PLAY on a regular basis.

â€œItâ€™s great to get Xperia PLAY into consumersâ€™ hands at last. This is just the start and the future is exciting based on all the interest and support we have from the game industry. A steady stream of fresh innovative content will be coming to Xperia PLAY over the coming months.â€

As announced at Mobile World Congress Xperia PLAY will be in stores in the US market with Verizon Wireless this spring.

Games available within the first week of launch: