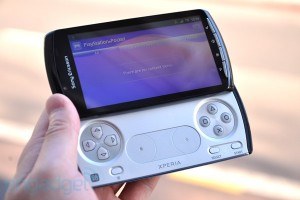 The PlayStation Phone has remained a rumour for a while – even though it has been spotted around the place and even videoed there has been a lack of officialdom about the sightings.

Well, now the SE Xperia Play has fallen into the hands of bloggers Engadget.

They’ve had a good fondle of the Android based phone/gaming hybrid and have confirmed that the specs include a 4-inch, 854×480-pixel display teamed with a 1GHz processor, 512MB of RAM all running Gingerbread as OS of choice.

Sliding out the devices gamepad they noted that it is equipped with a pair of shoulder buttons like the PSP and the expected D-pad and four buttons sporting the trademark square, circle, triangle and cross icons.Â  Instead of analogue sticks you get two touchpads.

Apparently the Xperia Play is comfortable for gaming and general use although they did state that, even though the build quality is better than the PSP Go the balance isn’t.

The Xperia Play will make use of the newly announced PlayStation Suite so, if you want a NGP but have a smartphone bolted on…….