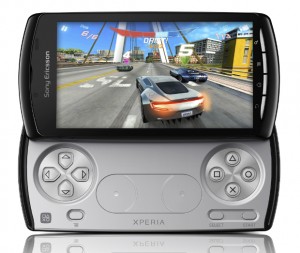 Sony Ericsson have bounced out their Xperia Play.

The Xperia Play (aka PlayStation Phone) will launch with more than 50 titles from more than 20 publishers featuring the likes of Gameloft, EA and Trendy Entertainment.

Dungeon Defenders by Trendy Entertainment was used to show the Xperia Play’s goods. The software has been name-checked because of its hardware-pounding graphics and it seems that the Play had no problem running the game and its slidey-out keyboard nullified the ‘unplayable on touchscreen’ accusations.

It has been announced that additional Xperia Play-only content would be added to Android games â€“ for example, the Play will have the first ever multiplayer version of FIFA on a mobile device!

The Xperia Play will also feature a 4-inch â€œReality Displayâ€ touchscreen and a 5.1-megapixel camera. It purrs along on a 1Ghz Snapdragon processor and an Adreno GPU.

Sony Ericsson says that graphics processor will allow 3D games to run schmoooove – up to 60 fps just in case you were wondering. As expected, the Xperia Play will come with Android 2.3 Gingerbread preloaded, and will be the first ‘PlayStation Certified’ smart phone.

Kaz Hirai of PlayStation also revealed that a classic PlayStation game would come pre-loaded on every Xperia Play device.

Sony Ericsson said that you’ll be able to grab an Xperia Play in March – In the UK it looks like T-Mobile will start selling the device in April, while Orange says “Q2”. Vodafone and Three have also confirmed that they’ll be selling the Xperia Play, so it looks like we get a fair choice of places to see those displays 🙂