Sony Ericsson Xperia Play – Hands On With the PlayStation Phone 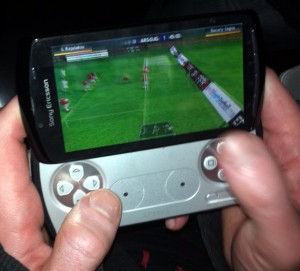 As promised – I was at a swanky Covent Garden venue last night courtesy of Sony Ericsson.

The whole point was to give us members of the press touchy-feely time with the new range of SE Android handsets. The incredibly thin Xperia arc was there. Its screen blew me away and the fact that, at its waist, there’s hardly anything there. The one gripe I had with the arc was the plastic finish on its back – everything else is gorgeous.

Whilst the arc, Neo and Pro all shared the basement the obvious star had a room (and crowd) all to itself.

Welcome to the Xperia Play.

It has taken 10 years for Sony and Ericsson to come up with a PlayStation branded mobile and it seems to have been rumoured for just about as long.

The Xperia Play has arrived along with Sony Computer Entertainment’s announcement of the PlayStation Suite which brings PlayStation-branded games, including PSone classics, to Android phones.

The Xperia Play will be available in both white and black, although the white one seems to be as elusive as the similarly pigmented iPhone 4 animal.

The Play feels positively chunky after a quick maul of the Xperia arc. Measuring 119x62x16mm it dwarfs the iPhone 4. It’s not a lightweight either tipping the scales at 175g – saying all that though, it does sit nice in your hand. 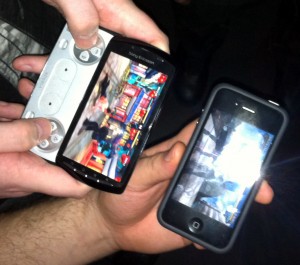 Slide the handset open and you are faced with those iconic PlayStation symbol buttons and cut-away d-pad. Right there is the reason for all the hullabaloo – this is the only smartphone on the market with dedicated physical gaming controls.

Closed and in portrait it could be any phone from the Xperia range which is no bad thing. What does strike you is its bright, sharp 4-inch display that boasts a 480×854 resolution.

Thankfully the Xperia Play launches with Android 2.3 Gingerbread. This boasts game performance optimisation as one of its headline features, along with an improved on-screen keyboard and better power management.

Slide the Play open to get your game on and… NOTHING.

Now I was told that these aren’t the finished finished articles that we were manhandling but I was disappointed that extending the game pad didn’t automaically take you to an arcade or PlayStation menu screen. The screen doesn’t do anything so you scroll through to find your desired game and then off you go.

The controls feel very much like the PSPgo’s and you get a brushed-metal plate which holds the d-pad and four buttons as well as start, select and menu buttons.

I was expecting the same kind of feel that I get from my MK 1 PSP but, instead, the controls were a bit stiff and ‘clicky’. The Play does have shoulder buttons hidden away – I felt that these were a little claustrophic (granted I am a bassist with fairly long fingers) but I had to adopt a finger tip style to operate these and not my natural PlayStation technique.

I actually enjoyed using the curious twin touch-pads between the buttons more than the physical controls. Each pad has a tiny raised stud at its centre and a raised line indicating its border. Using your thumbs as you would the analogue controls on the Dual Shock feels natural.

Under the hood is a 1GHz Qualcomm processor, 8GB of memory (expandable to 32GB) and a 5-megapixel camera.

Confusingly no HDMI out – There’s 4 phones at this soiree and 3 of them have HDMI but not the Play. How cool would it be to have, for all intents and purposes, a PSOne in your pocket?

Sony Ericsson are claiming that the Xperia Play will last five-and-a-half-hours when gaming before needing juice. 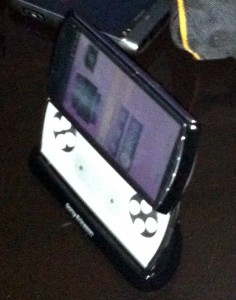 The firm will also be offering a multimedia dock which charges the Play via its micro-USB port and connects to a home stereo system through line out. No, not even the dock has HDMI out.

Xperia Play will land on UK shelves in April and will come with seven pre-installed games and 50 compatible launch titles. Those seven are: The Sims 3, FIFA 10 (Madden in the US), Tetris, Bruce Lee Dragon Warrior, Star Battalion, Asphalt 6 And Crash Bandicoot.

Since it’s the only Android phone with physical controls, games have to be re-engineered to make use of them. Sony Ericsson promises it’s sending out as many dev kits and talking to as many developers as it can to ensure wide support.

It’s definitely the kind of phone that will get a nod of approval from other gamers on the commute. It looks the business.

For me it doesn’t feel as top-end as the flagship phones from Apple or HTC but the game pad does. I think the Play suffers from the same thin plastic finish that the arc has. Which is a real shame – I was told that it wouldn’t matter once the arc was in a case. Errm – isn’t the selling point of the arc how thin it is? I digress.

Now – the Xperia Play is obviously using its gaming ability to lure that Â£40-a-month out of your account. Without spending some real time playing on it I’m not yet to be convinced.