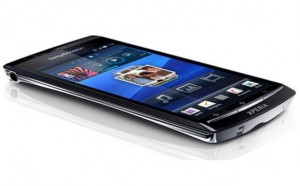 Peek-a-boo pics have been appearing around CES 2011 of a new Sony Ericsson phone and now there’s some details, pics and even a video!

The Sony Ericsson Xperia arc is a gorgeous, slim, thing of ergonomic beauty and it’s specs aren’t bad either! 😉

The Android 2.3 Gingerbread OS will purr along on a 1Ghz Qualcomm processor. The Xperia Arc also packs a decent sized 4.2-inch 854 x 480 display and an 8-megapixel camera fitted with Sonyâ€™s Exmore R sensor.

There’s support for a 16GB microSD as well as DLNA and HDMI.

Measuring only 8.7mm at its narrowest point and weighing a mere 117grams you’re hardly going to notice it in your pocket.

Other details are scarce at the moment but who needs more words when there’s the video below?